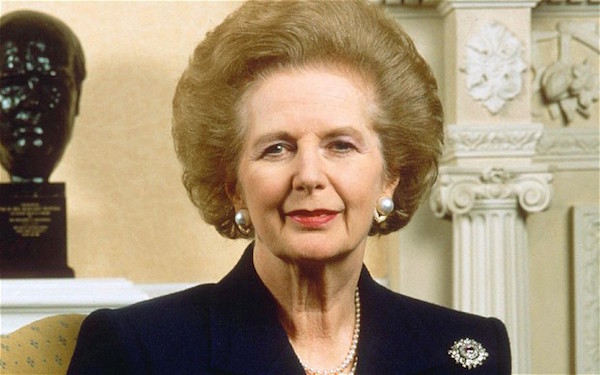 All corporatism – even when practiced in societies where hard work, enterprise and cooperation are as highly valued as in Korea – encourages inflexibility, discourages individual accountability, and risks magnifying errors by concealing them.

What is success? I think it is a mixture of having a flair for the thing that you are doing; knowing that it is not enough, that you have got to have hard work and a certain sense of purpose.

I do not know anyone who has got to the top without hard work.

We have been ruled by men who live by illusions … the illusion that there is some other way of creating wealth than hard work and satisfying your customers.

The first step in calculating which way to go is to find out where you are.

Do you know that one of the great problems of our age is that we are governed by people who care more about feelings than they do about thoughts and ideas.

What we are now doing to the world, by degrading the land surfaces, by polluting the waters and by adding greenhouse gases to the air at an unprecedented rate – all this is new in the experience of the earth. It is mankind and his activities that are changing the environment of our planet in damaging and dangerous ways.

Good Conservatives always pay their bills. And on time. Not like the Socialists who run up other people’s bills.

It is your tax which pays for public spending. The government have no money of their own. There is only taxpayers’ money.

Every family should have the right to spend their money, after tax, as they wish, and not as the government dictates. Let us extend choice, extend the will to choose and the chance to choose.

Let us never forget this fundamental truth: The State has no source of money other than money which people earn themselves. If the State wishes to spend more it can do so only by borrowing your savings or by taxing, you more. It is no good thinking that someone else will pay – that ‘someone else’ is you. There is no such thing as public money; there is only taxpayers’ money.

Margaret Thatcher Quotes if you want something done

And what a prize we have to fight for: no less than the chance to banish from our land the dark divisive clouds of Marxist socialism.

Socialism is in no way a curate’s egg

The real case against socialism is not its economic inefficiency, though on all sides there is evidence of that. Much more fundamental is its basic immorality.

I do not know anyone who has got to the top without hard work. That is the recipe. It will not always get you to the top, but should get you pretty near.

Disciplining yourself to do what you know is right and important, although difficult, is the highroad to pride, self-esteem, and personal satisfaction.

No one would remember the Good Samaritan if he’d only had good intentions; he had money as well.

To wear your heart on your sleeve isn’t a very good plan; you should wear it inside, where it functions best.

I always cheer up immensely if an attack is particularly wounding because I think, well, if they attack one personally, it means they have not a single political argument left.

One of the things being in politics has taught me is that men are not a reasoned or reasonable sex.

Socialist governments traditionally do make a financial mess. They always run out of other people’s money. It’s quite a characteristic of them.

There is no such thing as society: there are individual men and women, and there are families.

The people of the Falkland Islands, like the people of the United Kingdom, are an island race. They are few in number but they have the right to live in peace, to choose their own way of life and to determine their own allegiance. They way of life is British; their allegiance is to the Crown. It is the wish of the British people and the duty of Her Majesty’s Government to do everything that we can to uphold that right. That will be our hope and our endeavor, and, I believe, the resolve, of every Member of this House.

No one would remember the Good Samaritan if he’d only had good intentions; he had money as well.

We had to fight the enemy without in the Falklands. We always have to be aware of the enemy within, which is much more difficult to fight and more dangerous to liberty.

Occupied Falklands are the thorn in my balls

Now, I have always wanted to agree with Lady Bracknell that there is no earthly use for the upper and lower classes unless they set each other a good example. But I shouldn’t pretend that the consensus itself was any of my concern. It was absurd and slightly despicable, in the first decade of Thatcher and Reagan, to hear former and actual radicals intone piously against ‘the politics of confrontation.’ I suppose that, if this collection has a point, it is the desire of one individual to see the idea of confrontation kept alive.

What we should grasp, however, from the lessons of European history is that, first, there is nothing necessarily benevolent about programmers of European integration; second, the desire to achieve grand Utopian plans often poses a grave threat to freedom; and third, European unity has been tried before, and the outcome was far from happy.

There is no such thing as society: there are individual men and women, and there are families.

Life in a free society…is heaven on earth to life in a socialist society such as Russia.

The truths of the Judaic-Christian tradition, are infinitely precious, not only, as I believe, because they are true, but also because they provide the moral impulse which alone can lead to that peace, in the true meaning of the word, for which we all long. . . . There is little hope for democracy if the hearts of men and women in democratic societies cannot be touched by a call to something greater than themselves.

Every Conservative desires peace. The threat to peace comes from Communism which has powerful forces ready to attack anywhere. Communism waits for weakness, it leaves strength alone. Britain must therefore be strong, strong in her arms, strong in her faith, strong in her own way of life.

Is there conscience in the Kremlin? Do they ever ask themselves what is the purpose of life? What is it all for?… No. Their creed is barren of conscience, immune to the promptings of good and evil.

I believe our way of life is infinitely superior for every human being than any which the Communist creed can offer.

The role of Ronald Reagan had been deliberately diminished; the role of the Europeans, who, with the exception of Helmet Kohl, were often keen to undermine America when it mattered, had been sanitized; and the role of Mr. Gorbachev, who had failed spectacularly in his declared objective of saving communism and the Soviet Union, had been absurdly misunderstood.

The habit of ubiquitous interventionism, combining pinprick strikes by precision weapons with pious invocations of high principle, would lead us into endless difficulties. Interventions must be limited in number and overwhelming in their impact.

I believe we should continue to have a partnership of national states each retaining the right to protect its vital interests, but developing more effectively than at present the habit of working together.

Power is like being a lady… if you have to tell people you are, you aren’t.

liars, and that’s what you have to remember so just don’t forget it’, and with that she waltzed off.

You can’t trust the Irish; they are all liars

I hate feminism. It is poison.

I hope we shall see more and more women combining marriage and a career. Prejudice against this dual role is not confined to men. I regret to say, it comes from our own sex.

The feminists hate me, don’t they? And I don’t blame them. For I hate feminism. It is poison.

I owe nothing to Women’s Lib.