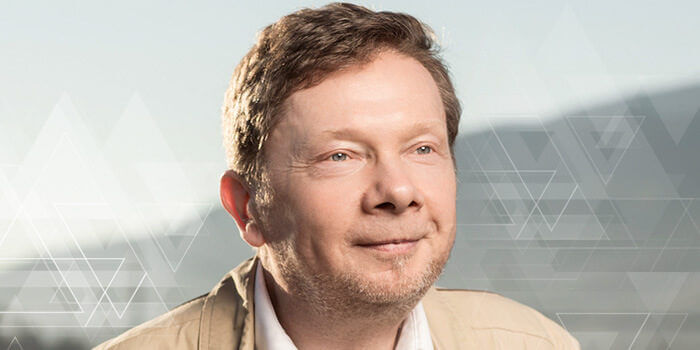 Love, joy, and peace cannot flourish until you have freed yourself from mind dominance.

True communication is communion-the realization of oneness, which is love.

This is why very often you find educated people in the media who look at spiritual books but they are so identified with their thought process, they don’t get it. They write reviews or articles and they miss the whole point. They can’t see the essence. It’s not their fault; it’s not them personally. It’s the human condition and its mind-identified state. And intelligence in itself doesn’t help. You can have two or three Ph. D.’s; it doesn’t get you any closer to spiritual realization. In fact, you might be more distant.

People had been writing to me and saying, “Can you write something for children?” I felt I couldn’t quite do it myself because I never had children.

If a fish is born in your aquarium and you call him John, write out a birth certificate, tell him about his family history, and in two minutes he gets eaten by another fish – that’s tragic. But it’s only tragic because you projected a separate self where there was none. You got hold of a fraction of dynamic process, a molecular dance, and a separate entity out of it.

You do not become good by trying to be good, but by finding the goodness that is already within you, and allowing that goodness to emerge. But it can only emerge if something fundamental changes in your state of consciousness.

The primary cause of unhappiness is never the situation but your thoughts about it.

Thought subsides when you pet your dog or you have a purring cat on your chest. Even just watching an animal can take you out of your mind. It is more deeply connected with the source of life than most humans, and that rootlessness in Being transmits itself to you. Millions of people who otherwise would be completely lost in the conceptual reality of their mind are kept sane by living with an animal.

Because dogs and cats still live in the original state of connectedness with Being, they can help us regain it. When we do so, however, that original state deepens and turns into awareness.

I have lived with several Zen masters — all of them cats.

Be aware that what you think, to a large extent, creates the emotions that you feel. See the link between your thinking and your emotions. Rather than being your thoughts and emotions, be the awareness behind them.

Awareness is the greatest agent for change.

And whenever you feel that essence in another, you also feel it in yourself.

I call animals “guardians of Being,” especially animals that live with humans. Because, for many humans, it’s through their contact with animals they get in touch with that level of being.

Our animal friends’ non-reactive and forgiving natures can teach us positive spiritual lessons on a daily basis.

Life is now. There was never a time when your life was not now, nor will there ever be.

To end the misery that has afflicted the human condition for thousands of years, you have to start with yourself and take responsibility for you inner state at any given moment. That means now

Some changes look negative on the surface but you will soon realize that space is being created in your life for something new to emerge.

Words reduce reality to something the human mind can grasp, which isn’t very much

The contemplation of nature can free you of that “me,” the great troublemaker.

The air that you breathe is nature, as is the breathing process itself.

Bring your attention to your breathing and realize that you are not doing it. It is the breath of nature. If you had to remember to breathe, you would soon die, and if you tried to stop breathing, nature would prevail.

There is another side to death. Whether death happens through an act of violence to a large number of people or to an individual, whether death comes prematurely through illness or accident, or whether death comes through old age, death is always an opening. So a great opportunity comes whenever we face death.

Why is old considered useless? Because in old age, the emphasis shifts from doing to Being, and our civilization, which is lost in doing, knows nothing of Being. It asks: Being? What do you do with it?

Death means that a form of life dissolves or that the imminent possibility of dissolution exists, whether through our own death or through illness or old age.

Short Eckhart Tolle Quotes on Your Self

Whatever happens, whatever you experience, feel, think, do – it’s always now. It’s all there is. And if you continuously miss the now – resist it, dislike it, try to get away from it, reduce it to a means to an end, then you miss the essence of your life, and you are stuck in a dream world of images, concepts, labels, interpretations, judgments – the conditioned content of your mind that you take to be yourself.

You are not ‘in the now;’ you are the now. That is your essential identity-the only thing that never changes. Life is always now. Now is consciousness. And consciousness is who you are. That’s the equation.

When you are present, when your attention is fully in the Now, Presence will flow into and transform what you do. There will be a quality and power in it. You are present when what you are doing is not primarily a means to an end (money, prestige, winning) but fulfilling in itself, when there is joy and aliveness in what you do.

Eckhart Tolle Quotes on Past

The pas has no power to stop you from being present now. Only your grievance about the past can do that.

I have lived with several Zen masters — all of them cats.

It is not uncommon for people to spend their whole life waiting to start living.

Being aware of your breath forces you into the present moment – the key to all inner transformation. Whenever you are conscious of the breath, you are absolutely present. You may also notice that you cannot think and be aware of your breathing. Conscious breathing stops your mind.

It is when we are trapped in incessant streams of compulsive thinking that the universe really disintegrates for us, and we lose the ability to sense the interconnectedness of all that exists.

That stillness and vastness that enables the Universe to be, is not just out there in space…it is also within you.

You are the Universe expressing itself as a human for a little while.

Time isn’t precious at all, because it is an illusion. What you perceive as precious is not time but the one point that is out of time: The Now. That is precious indeed. The more you are focused on time—past and future—the more you miss the Now, the most precious thing there is.

Your outer journey may contain a million steps; your inner journey only has one: the step you are taking right now.

Realize deeply that the present moment is all you have. Make the NOW the primary focus of your life.

Once you have made peace with the present moment, see what happens, what you can do or choose to do, or rather what life does through you. There are three words that convey the secret of the art of living, the secret of all success and happiness: One with Life. Being one with life is being one with Now. You then realize that you don’t live your life, but life lives you. Life is the dancer and you are the dance.

Then, if action is possible or necessary, you take action or rather right action happens through you. Right action is action that is appropriate to the whole. When the action is accomplished, the alert, spacious stillness remains.

You find peace not by rearranging the circumstances of your life, but by realizing who you are at the deepest level.

Whatever you accept completely will take you to peace, including the acceptance that you cannot accept, that you are in resistance.

If you are not in the state of either acceptance, enjoyment, or enthusiasm, look closely and you will find that you are creating suffering for yourself and others.

Acceptance of the unacceptable is the greatest source of grace in this world.

Life is now. There was never a time when your life was not now, nor will there ever be.

Time isn’t precious at all, because it is an illusion.

Why does the mind habitually deny or resist the Now? Because it cannot function and remain in control without time, which is past and future, so it perceives the timeless Now as threatening. Time and mind are in fact inseparable.

We are a species that has lost its way. Everything natural, every flower or tree, and every animal have important lessons to teach us if we would only stop, look, and listen.

The first recognition of beauty was one of the most significant events in the evolution of human consciousness… seeing beauty in a flower could awaken humans, however briefly, to the beauty that is an essential part of their own innermost being, their true nature.

The flower of #‎ consciousness needs the mud out of which it grows.

When the mind loses its density, you become translucent, like the flower. Spirit – the formless – shines through you into the world.